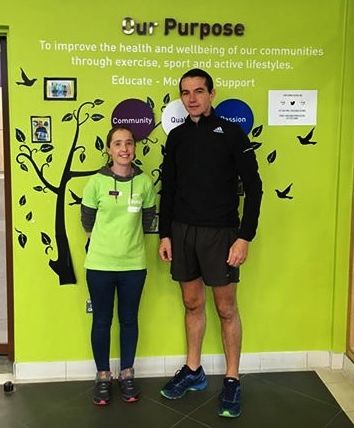 A true sportsman, a family man and a top athlete has decided to take on the biggest test in his athletic career.

Warren Terry, 36, is putting his passion for athletics to the ultimate test by taking on Ironman 2019. Youghal proudly plays host to this fantastic event on the 23rd June 2019. Putting his best foot forward Warren, a father of two boys, faces a 3.8km sea swim in the sandy Claycastle beach in his hometown of Youghal. He then hops on a bike to endure a 180km cycle along the coastal roads before finishing with a fast and flat 42.2km run through Youghal town itself. Both physically and mentally, this act of endurance puts even the world’s top athletes through their paces. They will come in force from all corners of the globe to put themselves up for this massive trial.

Warren has been a loyal member of Aura Leisure Youghal for many years, so we decided we wanted to be part of his journey. We are very proud to announce that we are sponsoring Warren on his Ironman journey. We will follow him as he goes through his vigorous training regime here in our centre. We will update you on this inspiring adventure in the form of a blog. We hope you follow us as we detail Warren’s training, his highs and lows and of course the event itself. 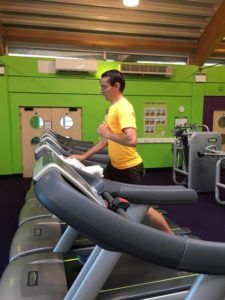 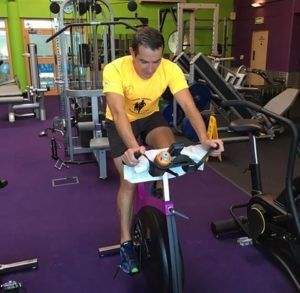 What has possessed Warren to take on such a huge commitment like this? Well, I caught up with Warren and got the low down on all things Ironman, his personal approach to it along with an insight into his training and how Aura is helping him on his way.

We hope you enjoy following this and most of all we wish Warren and indeed all participants the very best of luck! You truly are inspirational.

Warren, every story has a beginning, what motivated you to sign up for Ironman 2019?

Always loved the idea of being able to do an Ironman race and took part in the Half Ironman last year in Dublin which I loved so when it was announced for Youghal in 2019 I jumped at the chance.

When did you start competing in Triathlons and why?

2015 Loughrea Sprint Triathlon was my first ever full Triathlon, I took part in the Moby Dick Tri the previous year but as part of a relay and afterwards said I want to complete one myself the following year.

No I don’t think so, once you know you can put in the training and commit to it then you are on the right track.

Which is the more difficult aspect of preparing for the competition, the physical or the mental?

Both to be honest, you need to sure that your body is ready for it but you need to be mentally tough also because when you get to 7,8,9 hours of competing then everything in your head is telling you to stop!!!!

Which part of the Triathlon is your strongest and which is your weakest?

Running would be my strongest but that won’t help me in anyway if I don’t get stronger in the swim or on the bike. I’ve come off the bike in races after pushing too hard and after a few kilometers in the run everyone is going past you and there is nothing you can do about it only dig in keep going but it is an awful feeling to have so that will be in my head all the way through training to not feel that way again.

Can you give us an insight into your training regime?

At the moment, I am training for The Lost Sheep Half Distances Triathlon in Kenmare at the start of September so building nicely for that. I am doing a bit of gym work a few times a week to build strength as I am not the strongest of guys so will need to be stronger for next year.

How do you fit training around your job and family?

Still learning what fits where at the moment and what works well for me but very lucky to have Liz to help out as we have 2 boys who are very active also. During the busier periods with work I will either be out earlier in the morning or later at night and always try to get my cycle at the weekend done nice an early so I can be home early also.

Are there times when you think “Why am I doing this?”

Not yet but I have no doubt I will ask myself that question a lot over the next 10 months!!!!

How do feel that Aura is contributing to your training?

Aura have been very good to us over the years, I learnt to swim in Aura with Kathy and then joined the Tri Training with Sebastian on the Sunday morning’s and Wednesday evening’s which has had the most effect on my swimming. I also got injured several years ago, so I was unable to run for several months so spent that time in the gym there and gave myself a very strong base for my Dublin marathon training where I ran my best ever time.

One of our company values is that we are proud of our shared successes – do you think that Aura can help you reach your own success?

Yes. Access to the gym will be a great advantage to me over the coming months and the ability to ask the lads anything while there is great but also, I will be using the pool during the winter to improve my swimming and the Tri Training with Sebastian is unbelievable so wouldn’t miss out on that.

We hope you enjoy following this and most of all we wish Warren and indeed all participants the very best of luck! You truly are inspirational.