Three months ago, this quote was as foreign and not related to me as brain surgery is to a dentist. On the 2nd of July this year I had the ridiculous idea to attempt the Moby Dick Sprint Triathlon. I have always been a strong swimmer and loved the water from a young age, but the thought of running for anything other than the last bus was in no way appealing to me. My “training plan” was to take it one day at a time and hope for a miracle. I started off VERY slowly. 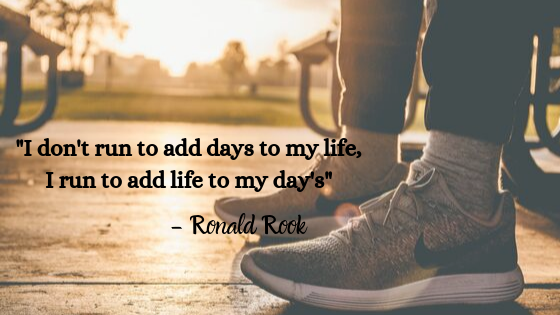 I started out with zero expectations

I was barely able to make it up the stairs after only running under 2km. Disclaimer: when I use the word “run” I am referring to me making all the motions of running, but at a pace in which I struggle to overtake a 70 year old couple ahead of me out for their leisurely stroll. I was incredibly surprised when two weeks into my “training” the miracle I had been looking for arrived in the form of a podcast. On this day I decided to listen to a podcast, rather than my regular playlist of upbeat music and a guilty Eminem track or two. I completely forgot about my pace (or lack thereof) and concentrated entirely on the issues being discussed in the podcast. The difference it made was ridiculous!

I was almost immediately running double the distance of what I had been. I got out of the “I can’t” mindset and I just did it. I was no longer telling myself to “make it to the next lamppost and you can rest then” but instead I was asking myself the question “are your legs sore” or “are you gasping for breath” and if the answer was no I would keep going. The feeling of completing a good (again disclaimer) “run” was starting to override the voice inside my head telling me to give up or that I wasn’t able. I later found out that my running pace per km was a full two minutes slower than that of the average person crossing a pedestrian crossing, but that didn’t bother me, I was just happy I was doing it! It was a great feeling and it pushed me to run further and train harder every day.

As unsure as I was about my running abilities, I had no doubt I wouldn’t give up during my swim. Unfortunately, I quickly came to realize that when you swim in the sea there are no blue lines painted on the seabed to keep you swimming in a straight line. I was covering more distance covering Zig Zag than the 750m I needed to swim for the race itself. I was very lucky to be surrounded by some people who knew what they were doing when it came to swimming in a Triathlon and they were more than happy to offer advice. Once I learnt to change from breathing every 3 strokes (something that had been drilled into me from club swimming) to breathing only every 2 strokes, things changed. I found it easier to spot a marking or a landmark every two strokes and managed to keep myself in a straight line.

My first major setback with my bike training was that I didn’t own a bike. After a short while of pleading I acquired a lovely bike on loan from my Dad. I rode along the Waterford Greenway a few times in all sorts of weather conditions, each time feeling more and more confident I would complete the 19km expected of me.

I have already won

I was starting to feel a sense of pride in myself and in how far I had come. I then found out that running wasn’t the only area of my life in which I struggle. I also seem to have difficulties using the internet. I realised I had clicked the wrong link when looking up information for this years Triathlon, so I had the wrong date for race day. After rearranging a few major life events, I was back on track and I felt ready for Race day. I was now enjoying running and sometimes even looking forward to going for a run after a busy or stressful day. For the first time I was finally able to relate to how running puts life into a person’s day! Looking back on my journey and its highlights, such as being able to hold a conversation for the entire duration of a 3 km run with a friend, and now regularly going for a run on my lunch break, something dawned on me. Almost a sense of calm from knowing I couldn’t fail on race day as I have already won because of the changes I have made to my lifestyle. It meant that there was only space left for excitement for the race itself!