Speaking last week to over 700 students at Temple Carrig School Wellbeing Week, sports pundit and mental health advocate Brent Pope, Dublin Footballer Shane Carthy and Paula Mc Loughlin, Chair of A Lust for Life, chatted about tools to use on a daily basis to tackle mental health challenges head on! 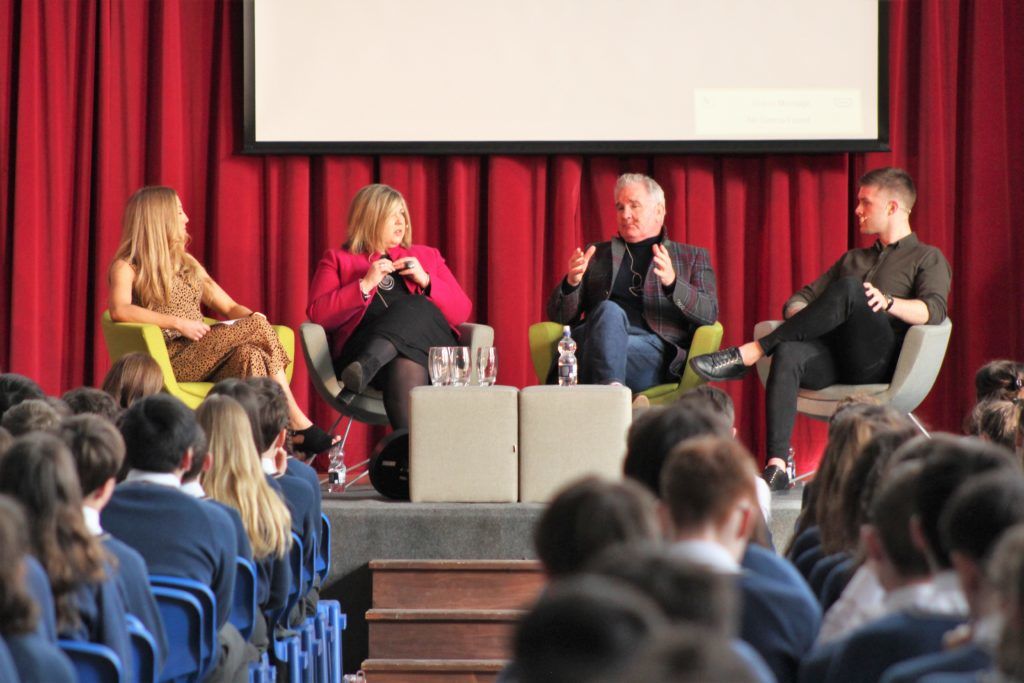 When asked by presenter Niamh Holohan of the Aura Holohan Group what strategies they put into practise to manage their mental health, Brent spoke of how he kept his anxiety a secret for 30 years and how he tries to achieve something every day and connect with someone in person to feel good. He advised the students to ‘’write down what it is you’re really worrying about and say, ye ok if I fail this exam or if I break up with someone or if I don’t make the sports team, is that the worst thing that can happen? There’s another option, maybe I’ll go for another team, maybe I’ll meet another girl or boy.’’ Brent also advised the students to ‘’have a toolbox and put things in place that make you feel better when you need them like getting out for a walk or spending time with a friend.’’ 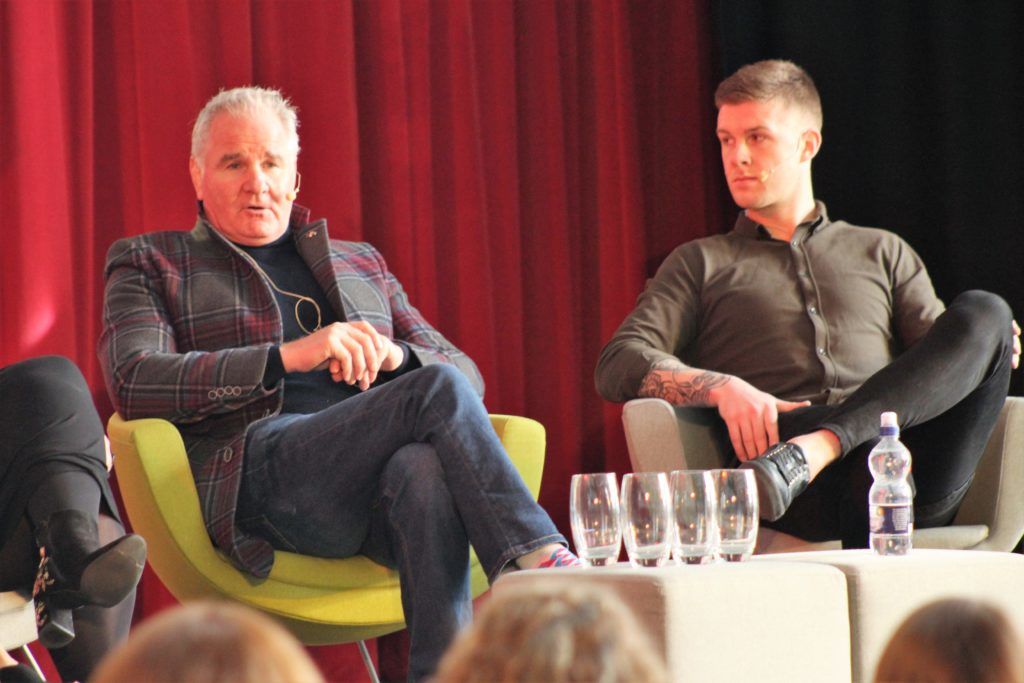 Dublin GAA Player Shane Carthy, who opened up about his struggle with depression in a blog post which SportsJoe covered before Christmas titled ‘I’m No Longer Surviving I’m Living’ (https://www.sportsjoe.ie/gaa/role-exercise-played-dublin-footballer-recovering-mental-health-battle-188250) inspired the audience speaking about how far he has come and attributes getting outside to an open field or park and exercising as one of his key coping mechanisms. Shane told the students ‘’I still have my good days and my bad days’’ and reinforced that’s its ok not to be ok and to reach out for help.

Paula McLoughlin, Chair of A Lust For Life which was founded by Niall Breslin, spoke about simple strategies like #soundeffect. She told the students ‘‘Lets just be a bit sounder to each other everyday, and ourselves’ and that ’wellbeing is actually quite a mis-used word, ultimately being happy is not about being in a constant state of euphoria, it’s about feeling centred and content within yourself and being kind to yourself and those around you.‘’ 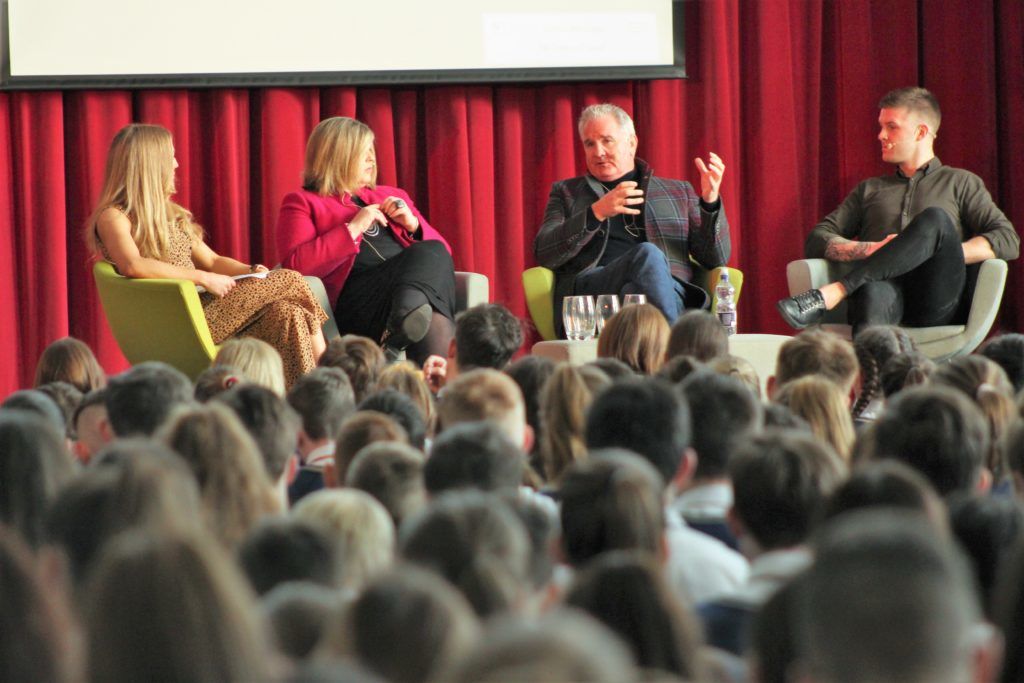 Brent echoed this when discussing the topic of social media which can be a breeding ground for teenagers for negativity and judgement and said ‘’You all have a responsibility to be kinder to each other’. What does that look like? It looks like a kind word instead of a nasty word, take away judgement.’’

When referring to the word ‘normal’ panellists explained that we all experience some degree of anxiety, stress and sadness, we are born with these emotions. We need those emotions to survive, just like our limbs. Its ok to not be ok just like its ok to have an injured limb. Shane told the students that ‘’Its about seeing the other side of your thoughts. Try flipping your thoughts from negative to positive. It’s not always going to be like that, I have conveyer belt of emotions and I accept them as they come around, fear, happiness, sadness, but I just accept, notice them and keep on moving on.’’

When a student asked about people romanticising and self-diagnosing mental illness, Brent said ‘having anxiety around exams, relationships, sports team or homelife is just a normal part of being a young person, its actually good for you to have that anxiety. It doesn’t necessarily mean you are having a panic attack or bouts of depression. Please don’t self-diagnose normal teenage anxiety or low moods. When it starts to distract you from living your life, then it’s good to go and see somebody and talk about it and get back on track. ‘’

As the panel discussion came to a close Niamh asked each panellist ‘’If you could go back and tell your teenage self, one piece of advice, what would that be?’’

Shane explained ‘’be more open minded. For me I was very tunnel visioned with my life and sport and I had no regard for my health. So be mindful of how others are feeling and be mindful of other people around you.’’ Brent followed this with ‘’I would say have some self-belief in who you are and where you are. Treat every day as a new challenge and something exciting in your life. You don’t have to conform to anyone or anything else. Be happy in your own skin. Your good and life will be wonderful for you.’’ Paula responded to say ‘’I would go back and tell myself I am enough, I have everything I need right now . It’s about comparing yourself to yourself and not to somebody else. Be the best version of you. Not somebody else.’’