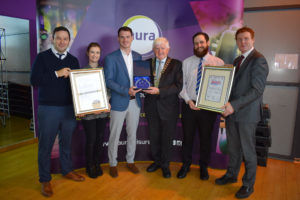 A local native of Meath, Gerard Morgan, the Group Health and Safety Manager who is based in Aura Leisure Centre of his home town Navan, has been the driving force which led Aura to achieving this accolade. Gerard has been a dedicated member of the Aura Holohan Group since 2011 when he previously managed both the Aura Drogheda and Navan centres.  In 2016 Gerard took the mantel of Group Health and Safety Manager and has elevated health and safety best practice in the group since. Gerard coordinates the safety culture across the organisation, supported by a team of safety representatives across all of the Aura centres. In the past Gerard has helped Aura Navan gain the National Gold Standard White Flag and helped Drogheda win Energy Awards for 3 years in a row 2015, 2016 and 2017. Along with these Gerard has supported the other Aura sites in achieving the coveted Gold Standard White Flag and EIQA Awards.

The Meath County Council Cathaoirleach Tim Kelly and the Director of Services Kevin Stewart, presented the award to Gerard at Aura Navan on November 8th to celebrate this achievement.

The Aura Holohan Group was also recently ranked in the ‘Top 30 Best Large Workplaces in Ireland 2018’ in the ‘Great Place to Work’ awards coming in at number 23.  This is the second year running that the company made this listing.

Aura operates 2 leisure centres in Meath, Aura Navan which has been in operation for over 19 years and Aura Trim which has been in operation for over 9 years and are both part of the Aura Holohan Group, an Irish owned private company with over 30 years’ experience in the Leisure industry.  The Group which operates in sport & leisure facility management, architecture, consultancy and event management includes 10 Aura Leisure Centres nationwide, 2 Anytime Fitness Clubs in Dublin, 1 DKIT Sport in Dundalk and the Support Office and Holohan Leisure Consultants in Dublin. The group has won numerous national awards for Disability Inclusion, Health and Safety, Environmental Management and Quality Systems.

Aura is the largest leisure operator in the country which employs over 370 staff across 10 Aura Leisure Centres. Between Aura Navan and Trim, there are over 68 staff employed in the leisure centres which see’s on average over 12,900 children attending Swim Academy per year and 6250 school children being taught swim lessons per year.  Aura Leisure is open to the public for Membership or Pay as You Go and includes 25m swimming pools, fully equipped gyms and an extensive range of Group Exercise classes. Both centres recently had a gym refurbishment in 2017.

For upcoming courses and for more information please visit www.auraleisure.ie/aura-training-academy or contact our course coordinator at ata@auragroup.ie.